As a parent, everything about your newborn is perfect. However, did you know that 25-30% of all newborns are born with malformed ears? Some ears protrude, others are folded over, sometimes the inner part of the ear is pinched, or the top of the ear is pointed or flat. Some will self-correct. Those that do not may require a surgical procedure later when the child enters elementary school. A procedure at that time is unlikely to be covered by health insurance.

WILL YOUR CHILD’S EARS SELF-CORRECT?

Some children’s ear deformities will self-correct, others will worsen and some will remain as they appeared at birth. The challenge is that neither you nor your pediatrician can know in advance. Why risk paying out-of-pocket later for ear surgery when the EarWell™ is covered by almost every health insurer?

WHAT IS THE EARWELL™ INFANT EAR CORRECTION SYSTEM

The EarWell™ is a clinically tested, soft, and painless medical device that is applied to a baby’s ears within the first 1-2 weeks after birth. It is worn for 4-6 weeks and, at the conclusion of care, over 90% of children’s ears are normally shaped. It requires no anesthesia, sedation, or medication because it causes no pain. It is non-surgical and non-invasive and best of all it works. 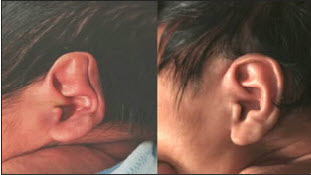 Early recognition of the ear deformity insures the greatest prospect of success. Parents need to be alert to the sometimes subtle misshapen ears if this non-surgical approach is to be used early and successfully.

Using these 4 parts, the EarWell System reshapes the cartilage of the deformed ear into the desired curvature of a normal ear. As noted earlier, over 90% of the babies treated with the EarWell Correction System have gotten good to excellent results.